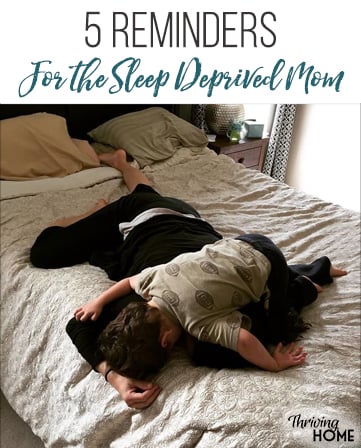 My third kid was about two months old and I was TIRED. So very tired.

The newborn honeymoon stage had worn off only to be replaced by an accumulation of sleep deprivation. One night, after already being up multiple times, I was woken up by my husband talking. However, he wasn’t speaking a language I could understand. Through the fog of my sleep deprivation I reasoned that he was probably dreaming and mumbling gibberish nothings. When I realized he was talking to me and waiting for an answer I started to piece together that he was in fact, not dreaming and he was in fact, speaking English. Problem was, I was so tired that I couldn’t comprehend the English language. I kid you not. My mind and body were so worn down from months of being up every two hours at night and not being able to nap during the day (thanks big kids), that I literally could not understand English.

It was a memorable, laughable low point.

Things have gotten better since then. I can now understand my husband when the talks to me at night but I’m still more tired than I’ve ever been in my life. My kids have a notorious reputation of being up early. REALLY early. While this is painful in itself, adding a newborn who is up 2-3 times a night to the mix and big kids who don’t nap any more during the day resulted in some pretty dreadful sleep deprivation.

I say all of this, not to complain but establish a little credibility when I say that I know what sleep deprivation is. I know what it feels like. I know what it’s like to not sleep well night after night without being able to make up for lost sleep the next day.

I know what it’s like to almost fall asleep standing up.

ANYWAY, I am familiar with being tired. It’s my normal.

After quite a bit of experience of navigating the daytime hours on very little sleep, I find myself coming back to a few mantras that help me stay upright on the really hard days. Good sleepers or not, rough nights are part of the parenting gig.

Here are 5 things I remind myself that help me get through the hard, tired days.

“This will not kill me.” This sounds a bit melodramatic but it’s something I have to remind myself. This was especially true with my first baby. Because the truth is, with my first baby, I seriously thought I was going to die. I would have major anxiety in the early morning hours when I realized how little sleep I had gotten. I would think, “I can’t do this! How am I going to function?”

Now, after a few years under my belt, when I see my night time sleep slipping away and start to feel that the inward panic, I take a deep breath and remind myself that being tired has not yet killed me.

It’s not fun. It’s not pleasant. It’s not preferable but I will not die. I have done this before and I will be able to do it again.

“Being grumpy about it isn’t going to help anyone.”

Just a few weeks ago we had a few nights in a row of very little sleep. A combination of nightmares, potty accidents, room sharing issues, and a baby’s growth spurt pretty much kept us up all night. Two nights in a row.

The following morning I was just mad. I was mad that I was so tired. I was mad at my children. I was mad at my life. Before 6am I had already been snippy with my 5 year old and my husband and I was prepared to soldier through a horrible day. Luckily I got a few alone moments and was able to just pray for help.

I quickly realized that being grumpy is not going to fix anything. It’s not going to breed empathy. It’s not going to make me less tired or make up for any sleep. In fact, my sour mood was just rubbing off on the people around me and making the environment of our home a miserable place to be. I’ve had to learn this over and over again but taking out my tiredness on the people around me is just a lose-lose situation. I’m far from perfect at this but I am learning more and more to get over myself and the grumps. “This is the day the Lord has made.”

This has been a parenting mantra that has served me well. With a flock of three littles, my perfect plans for the day are often thwarted by illnesses, misbehavior, potty accidents, spills, you name it. And of course, it’s not uncommon to lose hours of expected sleep at night for many of the same reasons.

When I find myself starting to get wound up about things not going as planned OR waking up more tired than when I went to sleep, I simply try to remind myself, “This is the day the Lord has made.” This little mantra reminds me that whatever unexpected thing just arose, or that long night we just endured, the Lord knew it was coming. He planned that day for me. He’s in the details of my life and even my sleep (or lack thereof!) Nothing is a surprise to him and even though things aren’t going according to my plans, they are always going according to his. This mantra reminds me to trust his sovereignty over my life and all its circumstances. “Today will be hard but tomorrow will be better.”

Being tired is no fun. My shoulders and neck get achy, I get headaches, and on particularly exhausting days, my face literally hurts. It’s hard. But I’ve come to realize that it’s OK for it to be hard.

Instead of daydreaming about a nap or bed time (or being jealous of the dogs napping all around me), I’ve grown to just lean into it and embrace that it’s going to be a hard day. And then, soldier through knowing that it will get better. I remind myself that the discomfort is temporary and tomorrow will be better. I try not to dwell on how tired I am but to keep moving forward through the day. One of these hard days actually inspired a post I wrote a while back called, Dig In. It unpacks a bit more of what it looks like to dig in and do the hard work of parenting. Swing by and check it out! Truth be told, when I am sleep deprived–like REALLY sleep deprived, I do a little extra something for myself. Often times we start the day off with bacon in the morning because we need comfort food.  Sometimes it’s an afternoon Starbucks mocha. Sometimes it’s letting the kids watch an extra show or two. Other times we’ll end up at Chick-Fil-A for lunch. But honestly, when the days are long and you are oh-so-tired, having a little extra treat or something to look forward to makes a big difference. It really does. Sweet, tired mama, I get it. It’s so hard but you are not alone. We are in the most demanding, intense stage of our lives. Our character is being shaped and our rough edges are being smoothed out by these trials. It’s SO hard but we can soldier through knowing that God is with us in every step we take and that he will give us new mercies every single morning. And sometimes those mercies show up as a Starbucks latte or short nap on the floor while your kids watch a Bob the Builder.

You got this, mama.

Lastly, we know that as a busy mom, your time is short and time to get in to God’s word is nearly impossible. That is why Rachel and I created these verse cards just for moms. We’d love for you to learn more about them and our heart behind creating them.

How We Use Our 5 Minute Drive to School (+7 Devotional Resources for the Ca...
Scroll to top