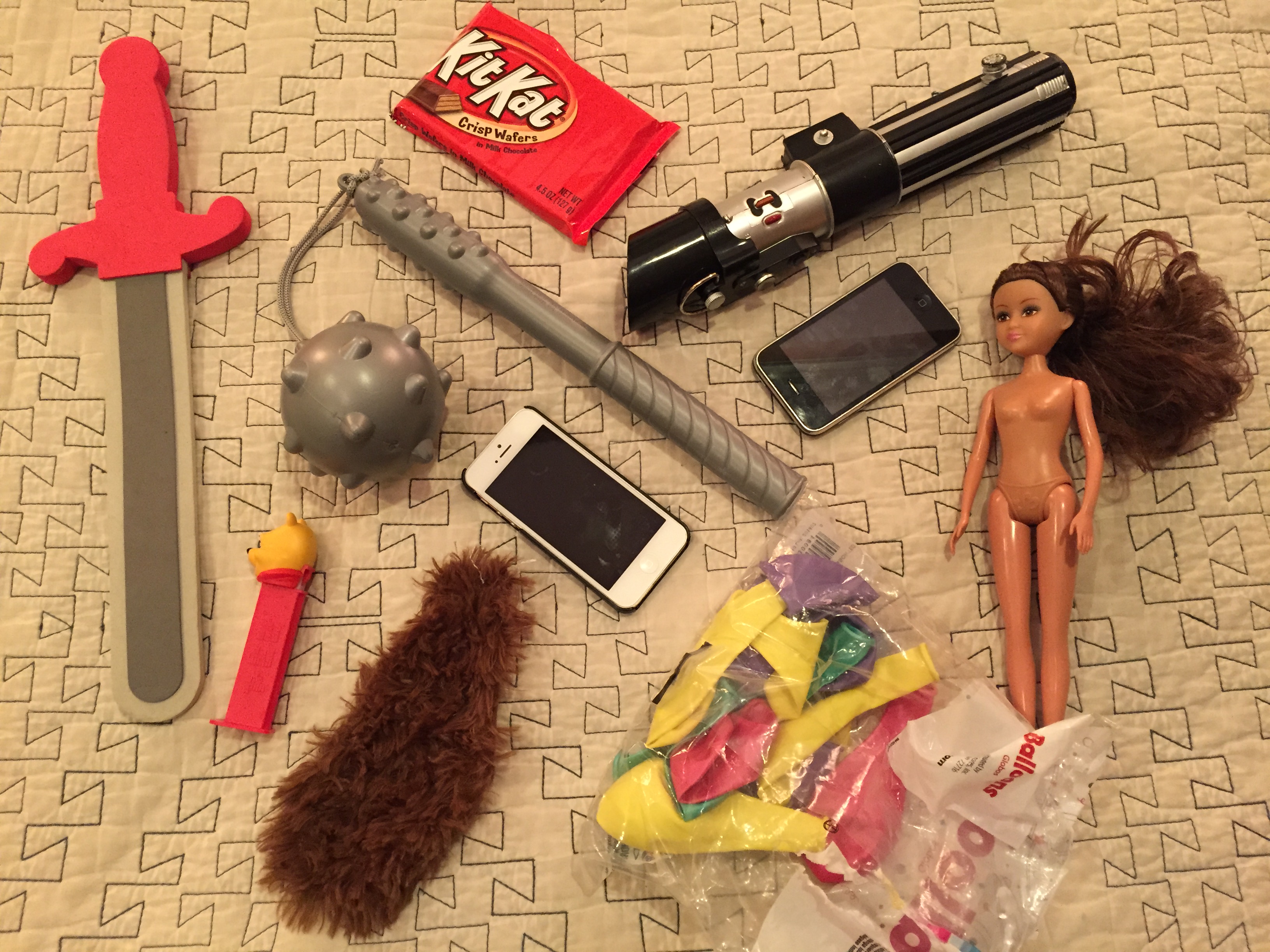 Water balloons. The missing ear of a stuffed animal. A Pez dispenser. A doll (inevitably) missing its clothing. Two old iPhones. And both medieval* and futuristic toy weapons. What do all of the things in this picture have in common?

Taken together, they look like either (a) the evidence room in the kid version of a hard-hitting cop drama, or (b) they’re waiting to board a boat heading for the “Island of Misfit Toys.” But the truth is they’re actually all items that my wife and I had recently confiscated from our three kids, who range from 5 to 9 years old.

If you’re a parent, you’ve probably been there. The kids are fighting, or they’re not listening, or they’ve unleashed enough raging chaos that you fear for your hearing and/or sanity. You eventually diagnose that the problem is related in some meaningful way to a particular object. And since you’re determined to prevent your home for descending into a real-life version of Lord of the Flies, you decide to remove the object from the equation.

Of course, you have to put these things somewhere. And it has to be someplace higher up in your house—I think there’s an unwritten parenting law that mandates this. Otherwise your kids—who are very quickly struck by a selective amnesia that makes them forget the problems involved with their use of the thing in question—wander by a day/hour/even minutes later, grab the item, and then you’re right back where you were.

(If this isn’t your experience as a parent, then let me congratulate you. You’re clearly better at this than me. Or you’re deaf.)

In our case, the “no play zone” has lately been on top of our refrigerator. And the other day I happened to notice that we had acquired a rather impressive collection. So I took it all down and snapped a picture,** thinking to myself, as all good pastors do, “This has got to be an illustration of something.”

And so it is. After mulling it over, I realized that my kids’ contraband points to at least three truths that are relevant regardless of your age:

One immutable biblical certainty: as fallen human beings, we’re incredibly adept at taking the good things that God gives us, and misusing them in one way or another. It’s not the fault of the things themselves, it’s ours. A lightsaber can accomplish noble deeds in the realm of the imagination, or it can be the means of smacking your little brother. And who doesn’t enjoy a few Pez? But when your child effectively treats that benign looking Winnie-the-Poo dispenser as his “Precious” it’s clear something has gone terribly wrong. We all do this kind of thing, and the root problem is our own sinful heart. It’s might be worth thinking about the ways in which you tend to use good things in the wrong way.

2. Sometimes it’s a mercy to go without.

Yes, I’m sometimes motivated to take things away from my kids out of simple exasperation. But when I’m parenting correctly, I do it because I love them. That is, I want to protect them from the consequences that might come about if they use whatever it is incorrectly. Yes, my kids might look at me like I’ve completely betrayed them when I take away the remaining Pez or the lightsaber, but they won’t be groaning on their beds with an upset stomach or a bruise on the side of their face. It goes without saying that God is a much better Father than I am, which means that, when he takes away or limits good things in our lives, we can be confident that he has a good reason, even if it’s not clear to us at present.

3. You can’t always get what you want…and yet life goes on.

When these confiscated items are out of sight, they tend to be out of mind pretty quickly. It turns out that life can go on without them. My kids eventually laugh again and play with other things, which tells me that the confiscated items might not have been as all-important as my kids once thought. Of course, we’ve completely mastered this truth as adults right? We never think we just “have to” have something or our life will be hopelessly incomplete. (He types sarcastically.) No, it turns out that there’s really only one thing that’s worth orienting our entire life around.

* True story: my wife, Rachel, actually bought the ball and chain (I think it’s technically called a flail) as a party favor for our 5-year-old son’s knight-themed birthday party. I’ve wavered on whether that was questionable or awesome. It’ll be interesting to see if any of the kids who were at the party accept the invite next year.

** In the interest of full disclosure, the spiked ball wasn’t actually on top of the fridge at the time, but since it had been recently confiscated (shocking, I know), I felt justified in throwing it in the picture.