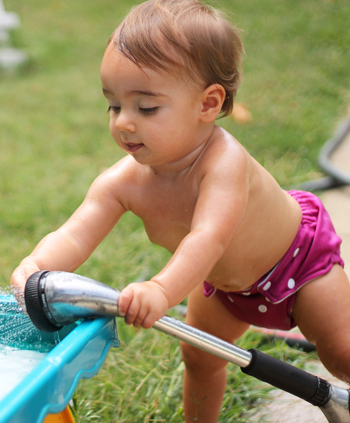 One of our most visited posts on Thriving Home is Cloth Diapering 101.

In this post that I wrote back in February,  I share why I cloth diaper, about the brand I use, how to care for cloth diapers, and even a slightly embarrassing video of how it all works.

My daughter is now 15 months and we continue to use cloth diapers. However, now that I have more experience with cloth diapering, I have picked up a few more things along the way that I want to share. Some good, and some bad.

Here is my attempt at sharing some cloth diapering wisdom:

I’ll be honest, I don’t know if I would have stuck with cloth diapering this long if I wasn’t using flushable liners. I don’t know what is going on in my child’s digestive track but it is not pretty. If I had to get my hands dirty and spray a diaper off every time she had a “skunk in the trunk” I would have waved the white towel. I order flushable liners from amazon and simply lay the liner (similar to a dryer sheet) in her diaper before I put it on. If she leaves a present for me, all I have to do is lift the sheet from the diaper (without touching anything) and flush it. If the poop was extra special, I still have to do a little spraying to get the gunk off but it is usually minimal.

When my gal was around a year old, I started noticing more leaks. I had been using the micro-fleece inserts that my Fuzzibunz diapers came with and they simply couldn’t keep up. Basically, as a baby gets older, they don’t pee as frequently but when they do, it’s in larger amounts. I considered double stuffing (putting two inserts in the diaper instead of one) but that would only lead to more bulk and a bigger challenge to find pants that fit. I called Fuzzibunz and they suggested I used hemp liners. I was told that hemp liners are much more absorbant than micro-fleece. I ordered a few and can say that they weren’t lying. We’ve hardly had any leaks since we replaced most of our diapers with hemp liners.

My only complaint about hemp liners is that they can take a long time to dry. I haven’t found this to be too much of a hassle yet because I just let mine dry in the sun but the times I’ve used the dryer have proven to be unsuccessful on the first attempt. I have found that if I use the dryer I have to do a normal drying cycle for the diapers and liners. I then remove the diapers and set the dryer on high heat for 30-40 minutes just for the hemp liners. It’s kind of a pain but it works.

A year ago I was raving about Fuzzibunz. However, my strong recommendation of the brand has changed. I still use them. In fact, I don’t have any other brand. They have kept their vibrant color, resisted staining, smell fine, look cute, and fit well. However, In the past 2 months, I have now had four, yes four, snaps break off. I was told that Fuzzibunz had a lifetime warranty. When I contacted the company, filled out a warranty claim, and sent my pictures of broken snaps in, I was told that I needed a proof of purchase. Umm, I’m sorry, I don’t keep gift receipts from 15 months ago.

I kindly told them that these diapers had been gifts from various people from 15 months ago and I don’t have any receipt and asked if there was any way around this “proof of purchase” policy. They said no. So I told them I wasn’t happy and would tell my blog readers about it. 🙂

That being said, SAVE YOUR RECEIPTS so you can make warranty claims when the dang snaps break. The diapers with the broken snaps are still very usable but it just makes me grumpy that their “lifetime warranty” won’t replace them. It seems as though the snaps have a lifespan of about 1.5 years and then decide they’ve worked hard enough. That being said, I might consider trying a few other brands in the future. I’ve been hearing good things about Charlie Banana. I may give those a shot next time around.

It’s been months since my lady has had a diaper rash. However, for a few months she consistently got rashes. I guess her tush was just super sensitive to moisture. I was frustrated because I was told that rashes were rare when cloth diapering. Because you can’t use diaper cream with cloth diapers we would always have to switch over to disposable and treat the rash until it was gone.

After doing a little research, I found that some mamas were using a little bit of cornstarch when they cloth diapered. It absorbs moisture so it helps prevent rashes for sensitive skin like my baby’s. So, despite the company’s warnings against powders, we would sprinkle just a tad bit of cornstarch directly on to her skin before we put the diaper on. This seemed to help quite a bit. If a full blown rash broke out, we would switch to disposables and use cream. The cornstarch was more of a preventable measure- not a treatment. I’m not recommending this for everyone- I’m simply sharing what worked for us.

Also, be aware that cornstarch can make a rash worse if the rash is being caused by a yeast infection. If you do choose to use cornstarch keep a close eye on the rash to make sure that it is not getting worse.

Show Me the Money

So is all this worth it?

I said this in my original post about cloth diapering but I want to reiterate that I am well aware that cloth diapering isn’t for everyone. I don’t look down on mamas who choose not to do it. Most of the women I look up to and highly respect do not cloth diaper. I’m ok with that. We are still friends!

I write posts like these simply to share what I’ve learned in the process and to hopefully shed some light on an area of raising kids that there are a lot of questions about. I feel like there is a lot of misunderstanding when it comes to cloth diapering and I hope to be an advocate and help for those who choose to go this route.

Thoughts to Make Your Heart Sing
Scroll to top