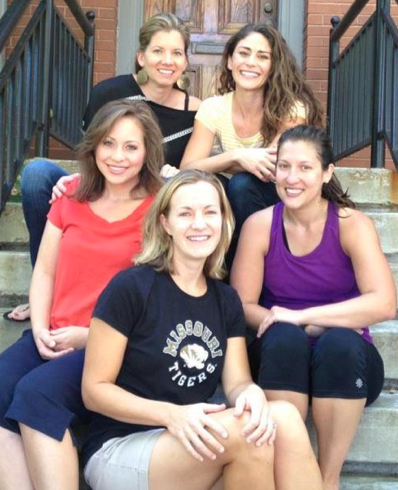 Some of the most glorious and, at times, messy parts of my life have involved deep, gospel-driven friendships. Tim Keller says in The Meaning of Marriage that the point of marriage is “for helping each other to become our future glory-selves, the new creations that God is making us.” I think the same principle is true of Christian friendships. A healthy, Christ-centered friendship helps us to draw closer to Jesus and become more of the person He wants us to be someday. This has certainly been the case for me in a few key friendships (like my besties in the picture at left) over the past few decades.

But, these types of friendships don’t come cheap. They reach far beyond shared hobbies, play dates with the kids, and commenting on one another’s Facebook pictures–although those things can certainly foster relationships on one level. These deeper friendships require much more–taking initiative to love and serve your friend even when you don’t feel much like it; opening up your life to that other person—warts and all; spurring one another on to grow in godliness; and yes (gulp)…working through conflict the right way.

Today I want to tell you a bit about what I’ve been learning about dealing with conflict in my own life and about a friend who recently confronted me in the right way. First, you it may be helpful to know where I began.

My History with Dealing with Conflict

When I was in college and even when I first got married, I didn’t know much about dealing with personal conflict the right way. That was a problem, because I had roommates, good friends, a boyfriend or two along the way, co-workers, and eventually a sweet husband who all had to take the brunt of some of my “attempts” at dealing with conflict. Here was my M.O. at that time.

The end result of these conflict-resolving “strategies” in my life was usually damage and distance to some valued friendships and even my budding relationship with God at the time. Thankfully, God taught me a lot through those situations, from my patient husband, and from His Word over time.

The Gospel Changes How We Deal with Conflict

Over the years, the most important conflict resolution strategy I’ve learned is simply the Gospel—what Jesus did through his life, death, and resurrection for those who believe. It’s no exaggeration to say that when we “get” the Gospel, it can radically change how we view and deal with relational difficulties. And, this belief can move us toward the intimate, life-changing, real relationships that we all long for.

If we understand the Gospel* then…

A few months ago, one of my best friends felt herself growing irritated with me about an issue that kept coming up in our conversations. I had no idea this was going on when I received her phone call. I could have responded in anger, felt defensive, or avoided it all together. But, her way of dealing with the conflict (coupled with God’s work in my own life) helped to diffuse any of those reactions. Here are few ways I noticed her resolving conflict the right way with me in our conversation:

The End Result of Resolving Conflict the Right Way

Ultimately, because of the way my friend dealt with our conflict, our friendship can grow and continue to flourish. My respect for her has grown even more for the way she handled the situation, and I know I can do the same with her if I ever have conflict to resolve. It’s a very freeing thing to have a relationship that shows love to one another on this level.

Resolving conflict the right way has taken a long time to learn in my life…and I certainly haven’t “arrived” yet. It takes remembering the big picture implications of the Gospel in this area. It takes going to God and asking him to help me through these individually messy relational situations. It takes stepping out of my comfort zone and sometimes looking like a fool. I won’t lie. I still get that sick feeling in the pit of my stomach when I think about confronting someone. But, I’ve seen that taking baby steps to resolve conflict the right way reaps great benefits in my life, my relationships, and even in the lives of the “little eyes” who are watching in my house.

Here are two books that can help you grow in the area of conflict resolution and building godly relationships.

War of Words: Getting to the Heart of Your Communication Struggles by Paul Tripp – This is a go-to book for all Christians when it comes to considering the power of our words in others’ lives and as it relates to our relationship with God.

– In particular, the short chapter entitled “Day 20: Restoring Broken Fellowship” was life-changing for me in this area. In college, a friend and I who were growing distant because of unresolved conflict both read this chapter at the same time. God convicted both of our hearts and gave us the tools to have a healthy conversation because of what we learned in this chapter! Not only that, but this book had a huge impact in my life very early on as a new Christian.

Healthy Recipe Ideas for a One Year Old
Scroll to top