END_OF_DOCUMENT_TOKEN_TO_BE_REPLACED

For the past 40 days, we have essentially been living without a fridge. While I’ve shared tidbits about this in Instagram stories and in our weekly email, I haven’t take the time write about the appliance drama unfolding in our home.

I will say, I’ve learned some very adulting-type-lessons that I think are worth sharing. 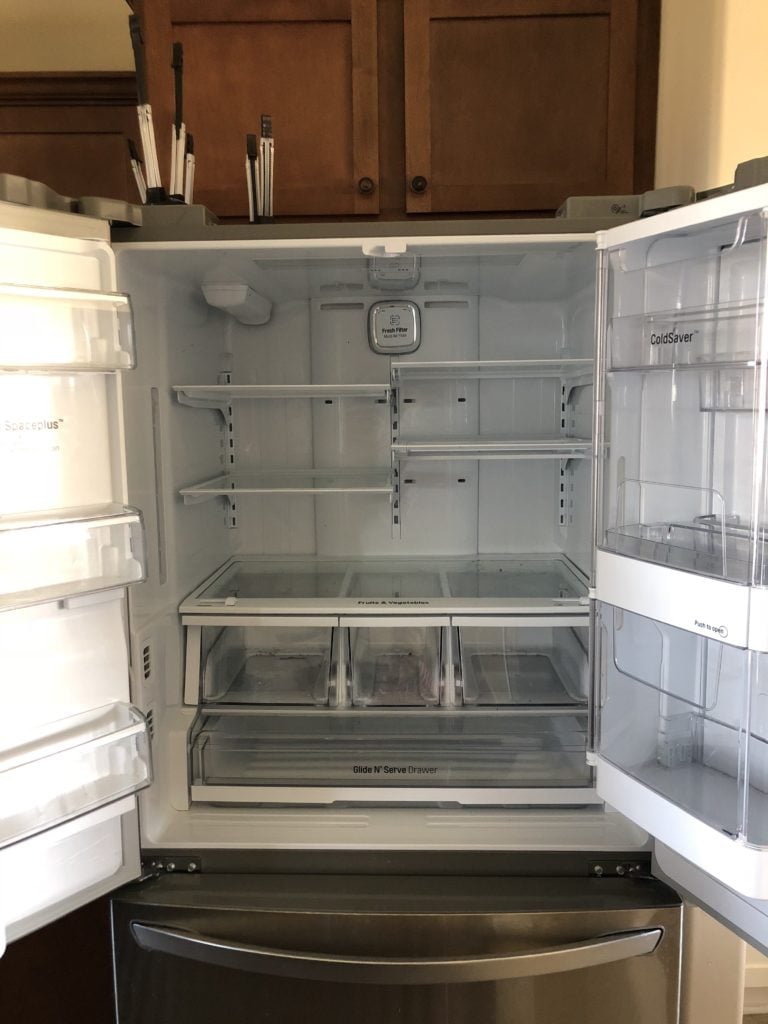 Our fridge was about 2-years-old. It came with the house that we bought 8 months ago. One morning, I opened our freezer to find that the food was frosty. Thinking that a kid left the door ajar, I gave it a good shut and went on with my life. The next day, I went to get frozen strawberries out of our freezer to find that I had strawberry soup. Along with everything-else-soup. Everything was melted. Everything had to be thrown away.  But the fridge was still cold. So I thought, “Oh, it’s just our freezer that’s broken.” I called a local repairman and they were scheduled to come out the next day. Yeah!

The next morning, I went to grab milk from the fridge and met a strange, musty oder. I noticed that the gallon of milk didn’t seem to be very cold. Nor is anything else.

Adulting Lesson #1: If your freezer goes out, your fridge will, too!

The fridge was warm. Everything in it was warm. We had to throw away everything. EVERYTHING! Meat, cheese, dairy, condiments, leftovers, produce. All gone. Goodbye. See ya. Peace out. You’re dead to me.

Here’s one thing I learned. If the cooling starts to go, it will start in the freezer area and then move to the fridge. They aren’t separate components. If one goes, they both do. So, in retrospect, when the freezer started to go out, we should have put all of our fridge items in a cooler. Thanks, Hindsight. You’re no good to me now. I was really looking forward to those leftover Carnitas.

The repairman came that morning and declared our fridge dead. We were painfully prepared to go buy a fridge that day, but it occurred to us to ask the previous owners if they had by chance gotten extended warranty on the fridge. They DID! And we painlessly got is transferred to us. I didn’t know they would do that, so that was a bright spot on a dark day!

Adulting Lesson #2: Always get the extended warranty on a fridge AND know that some companies allow you to transfer them.

Here was something interesting that the repairman told us: While he can’t prove it, he sees that refrigerators are typically built to last 6-8 years. He said their refrigerator graveyard is filled with 6-8 year olds. If a fridge lives past 8 years, they consider it a good life. He suggested to always get a warranty because they are just built poorly.

Some warranties, like ours, will even include the cost of the lost food. While that check came in very quickly, the process of getting our fridge repaired and eventually replaced was anything but quick.

Armed with my new extended warranty powers, I contacted Home Depot and filed a claim. Little did I know that I was entering into a snail paced process that would make me want to claw through the walls of my house at times. The reason this process was so painful was that Home Depot deferred claims to a different company, and that company only worked with a technician located two hours from us. Therefore, it always took 20 minutes to get ahold of the right person AND appointments would have be scheduled further out to allow travel time.

It took a week, but Home Depot’s technician finally arrived. He found that 3 of the 4 major parts needed to be replaced (due to a compressor issue) and said he’d be surprised if Home Depot wanted to fix it.

A few days later we were told that Home Depot did in fact want to fix, not replace the fridge, but the parts would take a few weeks (A FEW WEEKS to come in.)

Two weeks passed, parts arrived, parts were installed, and we were happy. Fridge is working. All is normal. We are moving on with our life.

Until that is, it broke again.

We woke up a few days later to find water all over the floor. From our first round, we learned that this was our indicator that the fridge is going out.

So, same song, second verse. We called, we waited, they scheduled our boy to come back out a few days later. This time it’s a different problem. They thought they fixed it. Only for it to break. Again. That’s for the 3rd time, if you’re counting.

In the end, we lost three rounds of food, and our technician, whom my kids got to know on a first name basis (John), became a regular around our home.

We learned some things from John. He had strong opinions about refrigerator brands and gave us some advice. 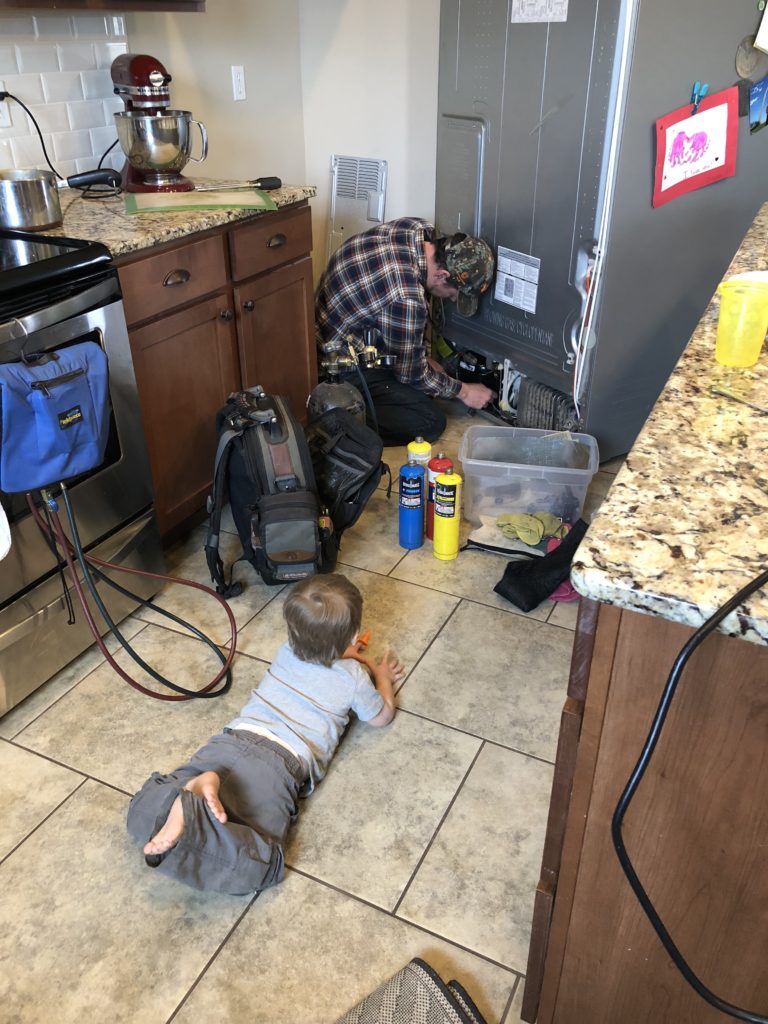 Adulting Lesson #4: Do not buy a Samsung or LG fridge.

John said he gets calls on those brands FAR more than any other brand. He even went as far as to say it’s probably a 20 to 1 ratio on the calls he gets on Samsung/LG fridges verses other brands. Again, this is more anecdotal and not statistically proven, but, if I’m going to take the advice on fridge brands, I’d prefer to get it from a technician rather than a sales person or online review. Just sayin.

He also advised to keep it simple if possible. The more bells and whistles that a fridge has, the more opportunities it has for something to break.

In the end, we did end up getting a check for the purchase price of our fridge. I went to a LOCALLY owned store, and following the advice of my new technician buddy, purchased a very simple Whirlpool fridge.

It’s been a ride, but I’ve learned a lot. I’ve learned that while it is indeed a hassle, we can live out of a mini-fridge in the basement and a cooler on the front porch. And sometimes an occasional use the neighbor’s secondary fridge (thanks, Jen!). I’ve learned that there are worse things in life than going fridgeless. I’ve learned to be thankful for when things ARE working. I got to know a technician from Rolla, MO and even stocked him up with kid books for his new grand-daughter.

It’s so easy to get fussy, angry, and bitter when something doesn’t go as planned, but I learned (the hard way sometimes) that this doesn’t make things any better for anyone. It wasn’t fun and I don’t want to do it again, but we came out on the other end with some hard-knock-adulting-wisdom that we can hopefully pass on.

Last lesson to share: Don’t put an egg carton in a cooler full of ice. It will disintegrate and you’ll have eggs rolling all over the place in your cooler. And some will break. Without you knowing. Until it’s too late. Just trust me on this.